Charlie Nelson is a very well-respected and loved Anishinaabe Elder and community leader with ties to many different Indigenous Nations stretching from Manitoba to across Turtle Island.

« Back to Elders Council  |  About Dakota Ojibway CFS » 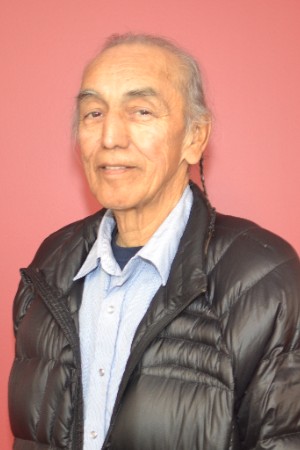 Traditionally known as Mizhakwanigiishik or Nibidekwaneb, Charlie belongs to the Bizhiw Doodem. He has been alcohol free for 41 years.

In 1988 he was promoted by the men of the Midewiwin Lodge and raised up by the Grandmothers of the Lodge to be Ogimaw (Chief) of the Western Doorway of the Three Fires Midewiwin Lodge; he was initiated to his 5th degree in 2007 and he entered his 6th Degree in 2016.

The second oldest of nine children, Charlie was raised in the Anishinaabe community of Bagwaa’onishkoziibing (Roseau River First Nation) situated in Manitoba. He is a proud father of five and grandfather of eight.

A fluent language speaker, Charlie emerged from an ancestral line of Midewiwin grounded in the traditional ways of the Anishinaabeg.

He, along with others, actively sought out to bring these ways to the people in the 1970s traveling and visiting with many Elders in Alberta, Saskatchewan, Manitoba, South and North Dakota, Minnesota, Wisconsin, and Ontario.

Charlie spent a great deal of time with the Grand Chief of the Three Fires Midewiwin Lodge, Bawdwaywidun Banaise, Eddie Benton Banai along with others like Edna Manitowabi, Jim Dumont, Mary Roberts, Herman Atkinson, and Peter O’Chiese. Charlie was a part of a collective movement of the reclamation and revitalization of the Anishinaabeg spirit. Many contemporary Indigenous knowledge and cultural movements have their roots in the foundations laid out by Charlie’s generation.

Charlie’s seeking of knowledge was not limited to Turtle Island; he has traveled aboard extensively, representing Anishinaabe people and the spirit of the Anishinaabeg in various countries.

In 1995 and 1998, for instance, he along with his siblings Terry and Josephine were a part of the Indigenous Peoples Report to the United Nations in Geneva, Switzerland. Charlie also visited Iraqi by invitation from their ambassador along with 3 other band counsellors and a film crew of 4.

In 2003, as part of Habitat for Humanities he travelled to North Jordan, assisting in the building of a home for a family in need. As part of the same trip, the team went to a city South of Cairo, Egypt where they assisted with improving a home.

Finally, in November 2003 and January 2005, Charlie travelled to Denmark, Sweden, and Norway in relation to his acting role in the play Frontrunners. Written by playwright and investigative sports journalist, Laura Robinson, the story is based on residential school experiences and has since been made into a movie. During his visit, he also had the opportunity to visit with the Sami people.

In his lifetime, he has been an educator in many capacities, including as an Adult Education instructor, a Life Skills coach and a Cross Cultural trainer. He has also held the position of coordinator/counselor in NADAP and served as a band councilor with the portfolios in Economic Development, Health as well as Child and Family Services.

He continues to be involved with helping families as chair of the local DOCFS LCWC committee and as an Elder for the regional DOCFS board. For a brief term, Charlie served as Assistant Director and Acting Director of the Ginew Wellness Center. He is currently the coordinator for the Traditional Healers program.

Mizhakwanigiizhik/Nibidekwaneb has dedicated his life to the well-being of Anishinaabe people; his approach in all aspects of his life – whether that be in the Minweyweywigaan Midewiwin Lodge or at a place of travel or his employment – is one that is grounded in traditional Anishinaabe ways of being and seeing the world.

Mizhakwanigiizhik/Nibidekwaneb does not just talk about the precepts of the 7 Grandfather Teachings: Love, Kindness, Respect, Humility, Courage, Wisdom, and Truth; he embodies them wherever he walks. In this manner, he is following the footsteps of our Ancestors and leaving tracks for the next 7 generations.